Printing out the track plan 1:1

Just a quick update, being Sunday and Germany we're not allowed to make noise. Well drilling, sawing will get the non PG Tips drinking locals in a fluster, they won't do anything much as they're all nice folk. But when in Germany, do as the locals.This evening I am uploading some of the aerial photos i've stitched together from www.britainfromabove.org.uk. It's in the gallery section.So on the menu today was printing out the track plan in 1:1 scale (well 1:76). Then sticking 76 pieces of A4 together. My wife thought I had completely lost it, I was in a similar frame of mind.The goal was to get a template for the viaduct trackbed and also the "ground level" baseboards. I'll trim the edges more tomorrow.Looking at the plan full size also gave a much better perspective for making some tweaks. I took a picture from the stairs and stitched it together. The only pen I had was a purple highlighter, so not the best for photography. And of course as it's Sunday ALL the local shops are shut. The giant fern is not a part of the original trackplan, I was just too lazy to move it.One thing I was pleased with is the radius of the curve at the south (right) end of the station. I spent some time over the past few weeks on Anyrail shortening the platforms in order to give me a more appealing curve. I can still fit a 10 coach train + loco in the station and the curve is about the minimum radius I would be happy with in the "scenic" area. 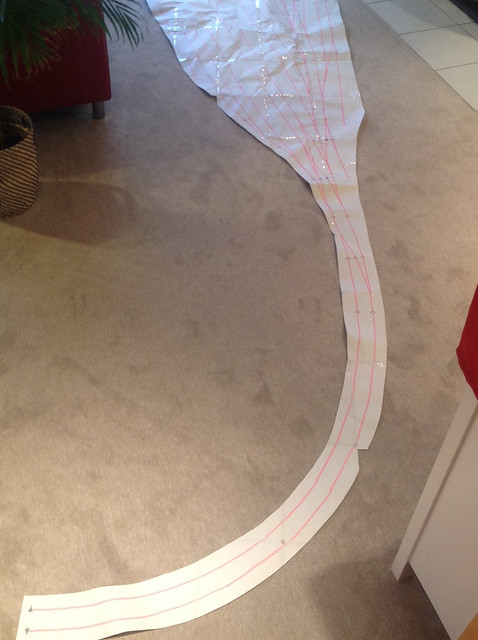